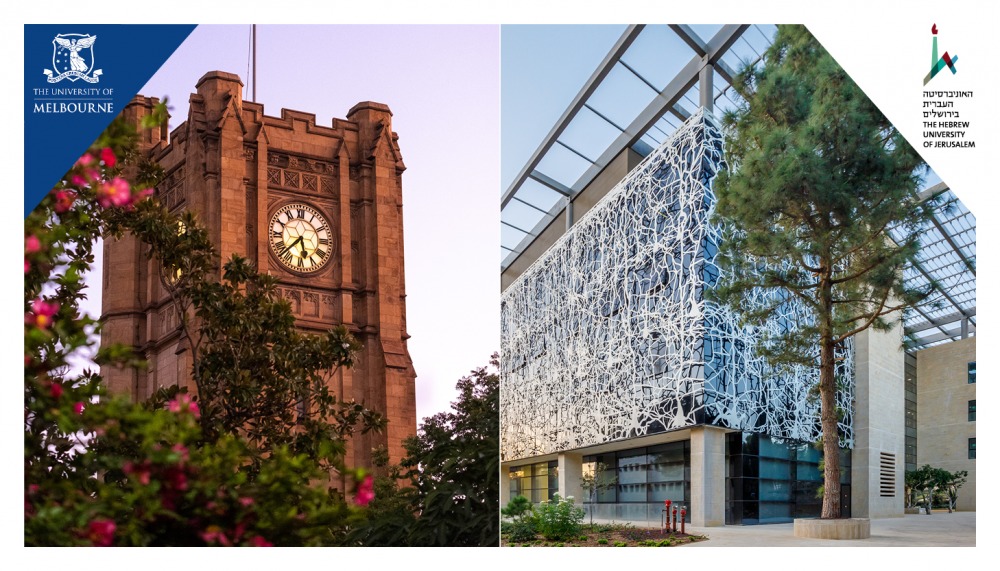 The recently launched Jerusalem-Melbourne Joint PhD Program joins the Joint Research Workshop Grants Program that was established in 2012, further strengthening the ties between the University of Melbourne and the Hebrew University of Jerusalem. The new joint PhD track enables outstanding doctoral students to benefit from the supervision of top researchers and complimentary expertise at both of these prestigious universities.

University of Melbourne Pro Vice-Chancellor (Graduate and International Research) Professor Justin Zobel said he was delighted that the new joint PhD program builds on existing research collaborations. “Our joint workshop funding has seeded collaborative research across the two universities and these relationships will now be strengthened through the joint supervision of outstanding graduate researchers.”

“We are thrilled to have launched the joint doctoral program together with the University of Melbourne, which has now gained traction,” adds Prof. Oron Shagrir, Vice President for International Affairs at the Hebrew University of Jerusalem. “We have two joint research groups underway, and two more projects are slated to begin in the coming year. We anticipate that these projects will continue to attract exceptional research students and will further enhance the ongoing collaboration between our two institutions.”

The Joint Research Workshop Grants Program enables faculty members from both universities to hold joint workshops in order to foster mutual research. From 2014 to 2019, ten workshops were funded under this program, six of which were held in Jerusalem and four in Melbourne. They included such diverse topics as “Bacterial Biology and Infection,” “3D Printing for Medical implants,” “New Frontiers in Emotion Regulation” and “From System Biology to System Agronomy,” among others.

Both workshops planned for 2020 had to be postponed due to Covid-19 and will hopefully take place soon: “Antimicrobial Peptides and their Applications,” which will be held in Melbourne and led by Dr. John Karas and Dr. Zvi Hayouka, and “Advancing the Science and Practice of Mobile and Ecological Cognitive Treatments Across the Lifespan and Neurocognitive Disorders,” which will be held in Jerusalem and led by Dr. Alex Bahar-Fuchs and Dr. Mor Nahum. The joint workshop program and other initiatives enjoy the generous support of the Australian Friends of Hebrew University.

The partnership was expanded in 2019 with the launch of the Jerusalem-Melbourne Joint PhD Program, open to all academic fields. The new program involves doctoral students working together in a research group that is supervised by both Australian and Israeli faculty. Every year, the two universities jointly publish a call for applications for joint research projects, whereby pairs of researchers representing both the University of Melbourne and the Hebrew University together propose research projects for PhD clusters from both institutions. PhD students in the program are enrolled in both institutions and are eligible to receive a PhD recognized by both universities. They must spend at least one year at the University of Melbourne and one year at the Hebrew University of Jerusalem.

In the program’s first year, 2019, two joint proposals were accepted, and research has already begun. The first proposal was in the field of cognitive neuroscience research and the work is being co-supervised by Dr. Hinze Hogendoorn, a Senior Research Fellow at the University of Melbourne’s School of Psychological Sciences, and Dr. Ayelet Landau, Assistant Professor at the Hebrew University’s Department of Cognitive Sciences and Psychology. One of the two PhD projects they are co-supervising investigates the role of brain oscillations in the mechanisms involved in predictive coding. The other PhD project investigates the actual information contained in each of the cycles of cortical excitability that the brain produces during perception.

“For me, the UoM-HUJI joint PhD program provided a unique opportunity to set up a valuable new collaboration with a leading researcher in my field. With the mutually complementary expertise in the supervisory team, and two PhD students being jointly supervised, it also provides an opportunity to create a small but tight international research team to work together on a given topic,” notes Dr. Hogendoorn.

The second proposal accepted in 2019 is in the field of quantum diamond. The co-supervisors are Prof. Nir Bar-Gill of the Rachel and Selim Benin School of Engineering and Computer Science at the Hebrew University of Jerusalem and Prof. Steven Prawer of the Melbourne Materials Institute at the University of Melbourne. Profs. Bar-Gill and Prawer have been collaborating since they jointly organized a workshop in Jerusalem in February 2017 on the topic of quantum diamond. They are again joining forces in the Joint Doctoral Research Clusters Program to combine the expertise of both groups for the purpose of developing new bio-medical tools with far-reaching implications. One of the PhD students recruited for this project is Galya Haim, who started her doctoral studies at the Hebrew University and plans to travel to Melbourne next year.

“Through the Melbourne-HUJI joint PhD program, Steven Prawer and I have initiated a collaboration to pursue next generation quantum technologies for imaging and sensing at the micron scale in the context of biological systems. The project aims to combine the expertise of the Prawer group in diamond fabrication and device engineering, with the Bar-Gill group's expertise in NV quantum sensing,” Prof. Bar-Gill explains, adding that, “I see this program as an excellent opportunity to strengthen and expand the ties between the two universities, and to provide the highest level international scientific training and experience for our best PhD students. I look forward to visiting the University of Melbourne in the not-too-distant future through this program, to promote this project and hopefully further expand my scientific network.”

In 2020, joint research proposals were accepted for two more pairs of projects. In one of the joint groups that was accepted to the program, the Israeli side of the partnership is represented by Prof. Omri Abend of the School of Computer Science and Engineering and Department of Cognitive Science at the Hebrew University of Jerusalem, and the Australian side is represented by Dr. Lea Frermann of the School of Computing and Information Systems at the University of Melbourne’s Melbourne School of Engineering. Both are experts in Natural Language Processing (NLP) and Computational Linguistics. One of their research projects will focus on scalable computational cognitive models of the bilingual lexicon – leveraging recent advances in machine learning and NLP and the availability of large-scale naturalistic data sets of learner language in order to investigate the structure and development of the bilingual lexicon. The other project deals with cross-linguistic semantic and syntactic representation, and the goal is to make progress towards a definition of a semantic and syntactic scheme that can be applied consistently across languages.

The second joint research group whose proposal was accepted in 2020 will be co-supervised by Prof. Rebecca Traub of the Melbourne Veterinary School, Faculty of Veterinary and Agricultural Sciences at the University of Melbourne, and Prof. Gad Baneth, Director of the Koret School of Veterinary Medicine at the Robert H. Smith Faculty of Agriculture, Food & Environment, the Hebrew University of Jerusalem. Both are internationally recognized researchers in the field of veterinary parasitology, specializing in the diagnosis, treatment and control of companion animal and zoonotic vector-borne diseases, and they have collaborated for many years.

“Since many of these diseases are transmissible from animals to humans, they not only impact animal health, but also public health. The UoM-HUJI partnership will provide an opportunity for one PhD student at each university to undertake a research exchange project,” notes Prof. Traub. The first project focuses on the development of next-generation molecular diagnostic tests capable of detecting all known and potentially new or novel tick-, flea- and biting fly- transmitted diseases of dogs and cats from clinical samples. “This newly developed diagnostic assay will be validated and applied to field settings in Australia and Israel as a biosecurity and disease surveillance tools to assist with early detection and mitigation of disease emergence in animals and humans,” she explains.

The second project focuses on mapping and ascertaining environmental, tick-borne pathogen co-infection and drug-resistance related risk factors for Leishmania spp. in dogs and cats in Israel. “Leishmania spp. are zoonotic sand fly-transmitted parasites that use dogs as primary reservoirs. The animal data will be correlated to ascertain association with the human incidence of leishmaniasis in Israel.  Although exotic to Australia, Leishmania does pose a potential threat to establishing in Australia,” says Prof. Baneth.

Although still in its infancy, the new joint PhD track has already generated a great deal of interest among researchers as well as doctoral students. Clearly, the synergy between these two top universities is amplified by the University of Melbourne–Hebrew University of Jerusalem Partnership, offering unique opportunities to advance research in a large range of fields.